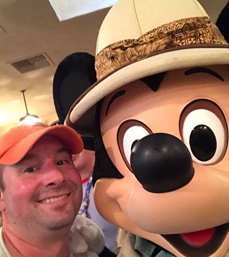 Overhearing a frustrated couple on their honeymoon outside of Mexico in Epcot’s World Showcase helped lead Steve to become a travel planner.  The couple being turned away from another table service restaurant proved that a trip to Walt Disney World takes a lot planning and Steve loves to help every step of the way!

A married father of two young children, Steve specializes in the complete planning of your family’s vacation.  In addition to all Disney properties, Steve has an affinity for Universal Orlando and the rest of Central Florida’s attractions.  Steve has personally cruised four different cruise lines as well.

Being a Walt Disney World veteran, Steve has enhanced his vacations by exploring some of Disney’s less frequented activities.  Steve has taken numerous behind the scenes tours, ridden a Segway in Epcot, and golfed most of Walt Disney World’s courses.  Furthering his outdoor experiences, Steve has fished in Lake Buena Vista and participated in numerous runDisney events throughout the year including two Walt Disney World marathons.

Steve has traveled extensively across the United States including Alaska.  In addition, he has personally visited Canada, Mexico, Bermuda, and multiple Caribbean locales.  Besides travel, Steve enjoys golf, kayaking, snorkeling, and food!

Email Steve directly to start planning your next vacation

Email Steve directly to start planning your next vacation

When we arrived on the cruise Steve had arranged to have some Bon Voyage items on the stateroom door with banners and a note inside.”

Steve was fantastic to work with. He has a full understanding of the Disney properties and parks, as well as the cruise.”

Any time I have a conversation with someone who is trying to set up a Disney trip, I always send them to MEI Travel.”

Special deals on all our destinations