WDW Radio – Your Walt Disney World information station, is the award-winning Disney podcast (named Best Travel Podcast for 9 consecutive years), live video, blog, and events dedicated to celebrating the magic of Walt Disney World, the Disney Parks, Disney Cruise Line, Marvel, and Star Wars – from the parks to the screens and everything in between! The show is hosted by Lou Mongello, a former attorney who left his practice to pursue his passion for Disney, and is also the author of numerous books and audio tours about the Disney Parks,. Lou is also the founder of The Dream Team Project, which, thanks to the participation and generosity of our community, has raised more than $350,000.00 to send children with life-threatening illnesses to Walt Disney World through the Make-A-Wish Foundation of America. 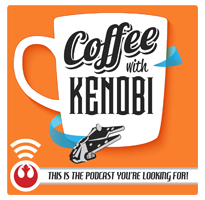 Coffee With Kenobi, your spoiler-free source for Star Wars discussion, analysis, and rhetoric, is the award-winning podcast that analyzes the saga in a whole new way. Since May of 2013, CWK has discussed the mythology of Star Wars from a place of intelligence and humor. Hosted by educator, writer, speaker, and Star Wars expert, Dan Z, the family-friendly show was named Fan's Choice in the 2016 Star Wars podcast awards, and also features reviews, event coverage, a YouTube channel, and a family of shows that bring insight and analysis not found anywhere else.

Each week, Dan Z is joined by different members of the Star Wars community as they explore the entirety of the Star Wars saga (movies, animation, Disney+, books, comics, etc.) and cover the latest news, theme park experiences, collectibles, and fan events while staying free from rumors and hyperbolic journalism.  CWK also speaks with the actors, authors, podcasters, Imagineers, bloggers, and creators of the franchise through interviews and discussion.

Coffee With Kenobi is the first Star Wars fan podcast to be Twitter verified and was the first-ever podcast to broadcast live at a Star Wars Celebration. The show has been featured in StarWars.com, The Hollywood Reporter, HuffPost, and Peoria Journal Star. Whether you love the Star Wars films, animated shows, books, comics, or collectibles, CWK has something for you. This is the podcast you're looking for.

The LaughingPlace is an on line community of Disney fans. Not affiliated with the Walt Disney Company, we are your one-stop site on the internet to find out what's going on in the Disney world, as well as connect with friends and fans.

The Mouse Steps was started in 2007 to showcase photo walks around the Walt Disney World parks and resorts. We have evolved to cover so much more than that at the parks, resorts, movies, Orlando area attractions and restaurants (and California too)!

The Royal Caribbean Blog was started in 2007 to showcase photo walks around the Walt Disney World parks and resorts. We have evolved to cover so much more than that at the parks, resorts, movies, Orlando area attractions and restaurants (and California too)!

The Main Street Mouse (TMSM) is an online community of Disney fans! It started as a hobby back in Michigan in 2010. Michele wanted to share her lifelong fandom and true love of Disney with others, so Scott was on board to make that happen. That was the heart of TMSM. We wanted to create a fan site where people could come together over their mutual love for all things Disney. A place to not just get updates or news, but share stories, tips, and make new Disney friends.

Little did we know, TMSM started to grow beyond our wildest dreams! In 2014 we took a leap of faith (and pixie dust) and moved or family to the Orlando area to be closer to the magic. Since then, we have been lucky enough to cover events for Walt Disney World, DCL and Disneyland as one of Disney’s top influencer sites. We also have been able to hold yearly meet ups and such to be able to thank our followers in person. Michele has written two books, “Moving to Main Street, USA” and the childrens countdown book, “How Many Sleeps Till Disney?” In addition to writing, she also covers Disney news for 96.5 WDBO in Orlando, and has truly made TMSM her passion. TMSM reports news with no rumor or drama, and has a family friendly FB group, TMSM Fan Nation. Disney fans can follow along for the latest news, as well as be a part of our extended Disney Ohana! All are welcome!

Alanna Zingano founded Travel the World A to Z in 2018 and it has been rapidly growing ever since. Alanna is a full-time travel content creator, who has had multiple videos go viral, created a community of over 30K subscribers, and continues to crush the YouTube game as she shares her love of worldwide travel and cruising. Alanna’s content revolves around inspiring others to travel more as she shares her advice and knowledge through her own adventures. Her continuous goal is to create a message about weekend getaways, cruise planning, travel and vacation tips and tricks, and excursion advice. Through her social media platforms, Alanna hosts her own branded cruise "Traveling from A-Z" in addition to an online store offering apparel, homeware, and accessories. Alanna has appeared on Fox News as a cruising expert.

Sign up for our email specials and be the first to know about our exclusive sales and travel offers!